Join us for the Bristol Classic Motorcycle Show!

From humble beginnings in 1980, the show has grown and evolved into Britain’s greatest annual celebration of all that is best about the motorcycles of yesteryear.

The event is a magnet for enthusiasts, club members and traders alike – attracting thousands from all over the country and beyond. It features the finest themed club displays in the world and there is fierce competition for the much-coveted ‘best stand’ award and cash prize every year.

This year engineering genius Allen Millyard will be guest of honour at the Bristol Classic Motorcycle Show over the weekend of February 26-27, 2022. Allen is renowned for creating mind-boggling bikes, having built more than 30 multi-cylinder machines ranging from four and five-pot, two-stroke Kawasaki machines to a V12 based on a Z1300.

Allen will showcase some fascinating creations at the show including his Kawasaki Z1 Super Six, Honda RC374 six, Velocette V Twin and Honda SS100 V Twin. Fans will have the chance to meet him at the show, ask questions about his one-off bikes and listen to them roar as they are fired up over the weekend. 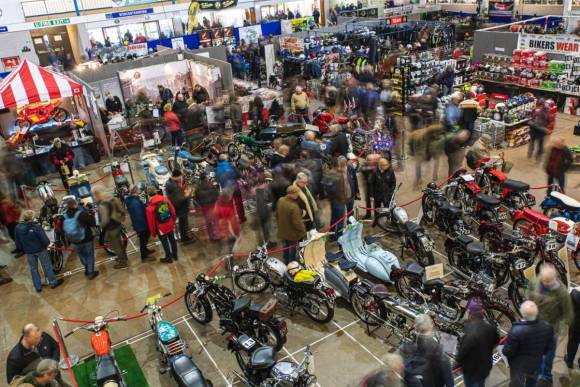 Dozens of private owners offer up their pride and joy for public scrutiny, including everything from immaculate showroom-condition motorcycles to rusty barn-finds freshly dragged from their decades-long resting place. This accessible show has a genuine family feel – with a host of personal touches that all add to the friendly and welcoming atmosphere.

Visitors will also discover that the Bristol show’s retailers have a great deal to offer, with quality autojumble stalls from around the UK nestled alongside purveyors of everything related to the scene. From oils to tools, clothing to spares, painters to welders, The Bristol Classic MotorCycle Show is the place to find what you are looking for.

For all trade enquiries visit www.bristolclassicbikeshow.com/trade-booking/ or call or call 01507 529 430